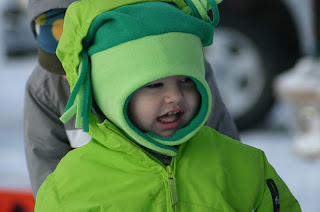 We have been stuck in the single digits for quite some time now with dips below zero and only a few ventures into the elusive double digits (woo, we hit 10!).  I shouldn't complain as my friends up in Fairbanks and Denali have been stuck below -30.  Who knew that could happen?

Unless you enjoy being locked in a cage with wild animals, you will have to take the kids outside.  Most kids will let you stick a hat on their hand and even boots on their feet, but it seems a large proportion of children balk at coverings on their hands.  I know it is hard to grab a snowball when your thumb is pinned to your hand, but come on children it is cold!

This is exactly the predicament faced by the developer of the Smittens.  She needed a way to make inexcapable hand coverings for her child.  These mittens basically are connected by a scarf that goes along the arms and over the back.  Since my children didn't have a problem with mittens, I was able to pass these along to some women in my crew who really needed them. 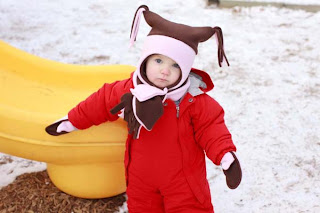 
Waterproof Smittens with Thumbs - reviewed by a mother new to Alaskan winters! ($36) 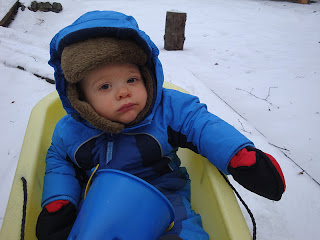 What a great product! I have to admit that going outside in single digit weather I was a bit nervous on how to keep my little guy’s hands covered. I’d already tried the cute baby mittens found at chain stores- but they barely made it out of the car before being torn off so I’d resorted t to covering his entire arm in a sock. I was given a set of Smittens to try at play group and all bundled in fleece we donned the waterproof Smittens and a snowsuit before hitting the white stuff. After a good hour outside the Smittens were still on and his fingers were all warm and dry. Success! I have to admit that he was wearing a size up so they were a little more like end caps- but I’m happy it means we’ll be able to use these mittens for future winters as well and they won’t come off no matter how much he pulls or bites them. My only issue was the bulk around his wrists and trying to squeeze his arms through the jacket- but I think that’s just the curse of having to wear so many layers in Alaska. 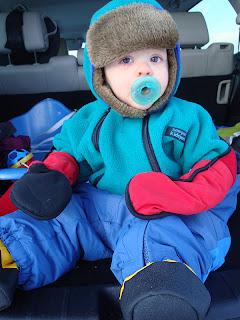 Smittens - these are a wonderful fleece material and since they have no thumb opening, they are easy to put on a child! ($18 or $24 with the thumb) 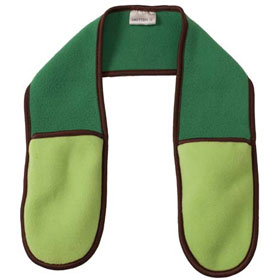 Reviewed by a very active mother who loved the mittens:

While the Smittens seem to be the trademark item, the following products should not be overlooked. 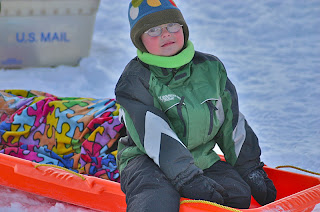 (modeled by my three year old on a zero degree day)

They are made from double layer of thick fleece in wonderful colors.  The size is perfect for toddlers allowing coverage of the neck, but allowing the child to breathe easily!  The size fits my two year old and three year old quite well.  It even worked as an ear band in a pinch after a hat was mysteriously misplaced.

The warm fleece in fabulous colors makes these hats perfect.  We tried out the toddler version with a velcro closure and tassel "ears".  It is slightly large for my two year old, but is perfect for my three year old.  It was warm enough for a snow machine ride and squished under his coat hood nicely.  We also received compliments on how cute it made my children look!


All in all, I am impressed by the design of the products.  They have a great idea with spot on construction.  The seams are sturdy, fabrics high quality and are offered in a variety of colors.  I recommend these products and are proud to give them my Alaskan Mom Approval as they help keep Alaskan mothers sane by allowing them to take their children out in the winter!  Thank you January Baby for letting us review your amazing products!
Posted by Princessliak at 6:06 PM

Search for a Review!